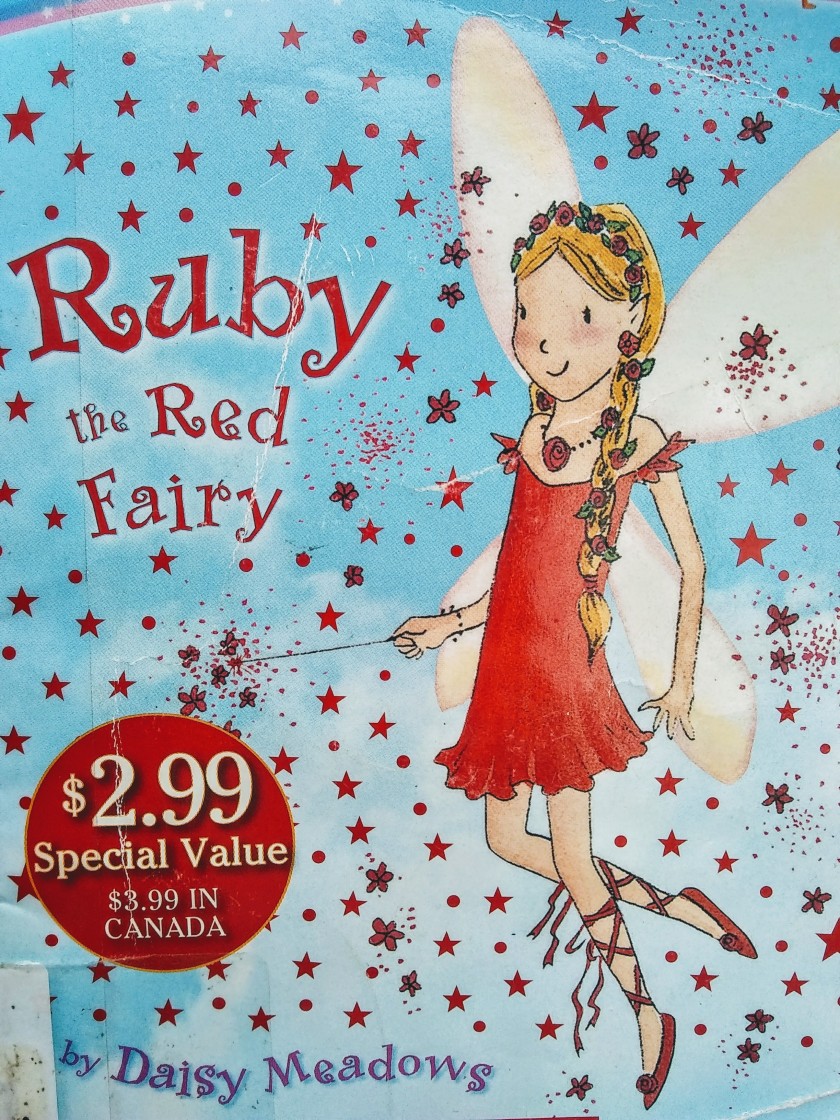 We had a thirty minute drive to the local harvest festival, so we brought along a book from our local library – Ruby the Red Fairy. Even though the book was sixty-five pages, we finished the whole story prior to our arrival. I was reading the book out loud to my three kids. I am sure it would have taken my 8 year old way longer to read the whole book by herself.

Ruby the Red Fairy by Daisy Meadows is the first book in the Rainbow is Magic: Rainbow Fairies series. This book is very simplistic which makes it ideal for a little girl who is just starting to make the transition to reading chapter books.

Ruby the Red Fairy introduces the reader to the storyline for the next few books. In this book, Kirsty and Rachel are two little girls who meet on their way to Rainspell Island. Upon their arrival, they go on a treasure hunt for a pot of gold at the end of a rainbow. Instead of finding gold, they meet Ruby the Red Fairy. Ruby had become trapped under a heavy pot while fleeing from Jack Frost.

Kirsty and Rachel promise Ruby that they will find the other missing rainbow fairies. Without the rainbow fairies uniting, Ruby’s homeland will remain under Jack’s spell forever.

In my opinion, there were both positives and negatives with this book. First, the writing style was very simplistic. On one hand, this is a positive for new readers who are transitioning to chapter books. Conversely, the simplistic style of this book made it highly predictable. As a parent reading this book, you will most likely be bored.

Third, the book felt like it was a trailer designed to lure you into buying book two. It just did not feel like much happened in this book. As soon as you started to feel like the story was truly beginning, the book ended.

Fourth, the book itself is made out of flimsy materials. The cover and pages are thin. The spine is not particularly durable either. I highly recommend obtaining these books from the library rather than spending your money to buy these books.

After we finished reading this book, I asked the girls if we should start book two. Both of my girls, voted to read book five of The Magic Treehouse series instead. My kids did, however, say they think we should read book two of The Rainbow Fairies series.

Overall, I think this book is best for children ages 4 to 8 years old. This book is ideal if you have a little girl who is going through the fairy phase.

On an unrelated note, as of today we have read 578 books. We are getting closer and closer to our goal of 1,000 books!